When Carole Cassidy opened a tax form informing her that she had earned more than $4,000 from Uber in 2019, it was a surprise on many levels.

Carole’s story, featured as part of a piece by 7 Investigates, isn’t as uncommon as you’d think. The 7Investigates piece also detailed another case of stolen identity involving an Uber driver in Massachusetts.

It’s disturbing in several ways. One obvious cause for concern is that anyone could have their identity stolen by someone trying to drive illegally for a rideshare service. But it’s also alarming because so many of us have relied on a rideshare service and trusted that the driver was who they claimed to be.

Though Uber and Lyft both claim that they extensively vet people before letting them drive, stories like Carole’s say otherwise.

Why Some Rideshare Drivers Steal Others’ Identities

Stories about unauthorized or fraudulent drivers have been reported in San Francisco, Houston, and London. In most of these cases, the fraudulent driver would not be able to pass the background check and screening needed to be eligible to drive for a rideshare company as themselves, which is why they choose to drive under someone else’s identity.

Perhaps the driver doesn’t have a valid license. Maybe they have a criminal record that prevents them from driving for a rideshare company. Or it’s possible that their driving record is so poor they’d never be allowed to drive using their own license. 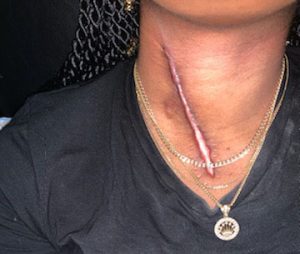 In some cases, the results of stolen identity by fraudulent Uber drivers have tragic results. Our firm is representing a client who was stabbed by a Lyft driver in Boston. The person to whom Lyft granted the right to operate was not the person who assaulted our client. Our young, female victim has a scar that will remind her of this incident for the rest of her life.

The scariest part of these instances is that we don’t know much about the fraudulent drivers because they’re using someone else’s identity.

One of Many Problems Facing Uber

Fraudulent drivers represent just one problem among many that Uber has encountered in ensuring the safety of its customers. Reports of assault committed by rideshare drivers have made several news stories and led to lawsuits against the rideshare giant.

Uber says it is constantly introducing new safety features and screening methods to ensure the identity of its drivers and the safety of its passengers. We can only hope that’s true.

Who Is Responsible When a Rideshare Driver Hurts a Passenger?

Rideshare companies like Uber and Lyft would prefer to shift liability to drivers whenever possible. This is especially true when one of their drivers causes a crash. But someone injured by a negligent Uber driver, whether as a passenger or another driver, can still name the company in a lawsuit.

When a fraudulent driver causes an accident or assaults one of their passengers, the company can also be held responsible through a lawsuit.

These lawsuits are incredibly important. Not only do they help ensure that injured people can get the compensation they need to recover from their injuries, they also create accountability on part of the companies whose vetting systems are inadequate.

If You Need Legal Assistance, You Better Phone Stone

At Jason Stone Injury Lawyers, we believe that injured people should get what belongs to them. After a serious injury caused by someone else, even and especially accidents caused by rideshare drivers, the injured person is owed compensation to cover the many costs of their injuries, including medical bills, lost income, and pain and suffering.

Let us fight for what is legally yours. Schedule a free consultation with the Massachusetts personal injury lawyers at Jason Stone injury Lawyers today.