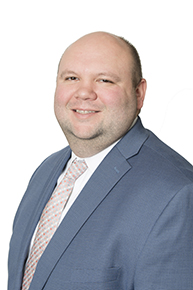 Scott Gilmond grew up in Millbury, Massachusetts and earned his Bachelor’s of Science in Criminal Justice from Northeastern University and his Juris Doctor Degree from Roger Williams University School of Law.

Scott comments that he had always wanted to be a lawyer, with a goal of fighting for the little guy and he that he decided to join the Jason Stone Injury Lawyers team after a co-worker had nothing but positive things to say about the team.

Scott’s career goals include continuing to expand his legal expertise, to become an effective trial attorney, and eventually to become a judge.

When he’s not working, you can find Scott spending time with his wife Kate and his puppy Teddy, and volunteering at local Head Start events.